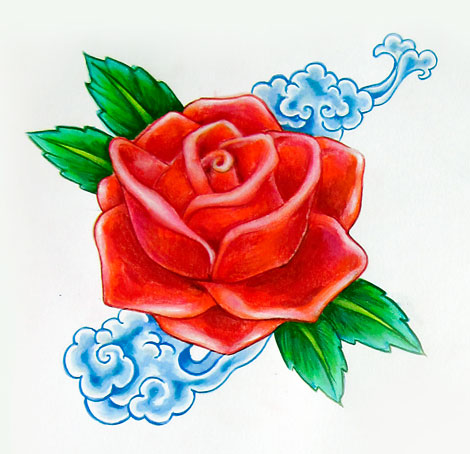 In the quest to support myself as an artist, I once answered an ad looking for a tattoo apprentice. I don’t even have a tattoo, and now that I’ve been behind the scenes, I doubt I ever will. It’s not that drawing on skin with an ink-laden needle startles me. It does. It’s the realization that the best tattoo of all is the one that only exists in the imagination. In my mind, the ultimate tattoo takes over the entire body and beyond, a complex menagerie of animals, monsters, people, philosophies, and history. Like most Librae, I’m a chameleon constantly changing colors. I’ll never stay in one room, most likely I’ll live in every one I come across. I’ll finally make up my mind when I’m dead.

My excursion into the tattoo world took place for two months one summer about three years ago. Apparently, a good tattoo artist can make a fair sum of money. But like a hair-dresser, you have to be fairly social. Being too quiet is suspicious to most humans—who is this silent psycho drawing on me, anyway?
I suppose being the only tattoo apprentice without an actual tattoo could potentially arouse suspicion. But everyone was nice to me anyway. It is surprising how many people would line up for a free tattoo from someone who never tattooed before.

I worked as a gardener by day, then reported for duty in the evening—cleaning, sterilizing, tracing, observing. No sleep to be had with that schedule. Notwithstanding, there was always drama in the background. By the umpteenth time I noticed the red lights of a squad car flashing on the wall one Saturday night, I began to think maybe the tattoo game “wasn’t my bag.” I like drawing on paper. Paper is quiet, low-key. Doesn’t need to be peeled off the ground in handcuffs.

I did admire my mentor for his talent, although I can’t vouch for his temperament. When it came to apprentices, he had the philosophy of an army drill sargeant. Not that he spit epithets in my face, but he was often belittling and snarky towards me, which made his criticism unconstructive to me.  He did have an extensive library of art books which he used for reference and inspiration. My homework” was to draw the same thing over and over constantly until the subjects were sunk completely into my memory and I could draw without thinking. He also suggested layering different medias so the work appeared rich and opaque. To his credit, he did more to influence my drawing style than any professor I ever had.

My last day at the tattoo parlor came without my knowledge. I put in a good two hours of outlining Japanese waves on an arm who had to go to jail the next day. I did my absolute best, executing with the same precision hitherto my teacher would often glance at and declare I “would put him out of business.” When I finished, the guy was turning around in front of the mirror, gushing. He loved the tattoo, sung arpeggios of praises. In walked the mentor, late for work as usual with car trouble. He proceeded to bash all the work I had done, because my waves weren’t Japanese enough. In my mind’s eye, I saw a ghost of myself pick up my bag and walk out the door. But I didn’t leave yet.  I spent a couple of stormy hours cleaning, prepping stations, sterilizing, tracing. The next customer walked in, I set up the station and sat down to observe. Mentor again deconstructed my Japanese waves, then my character. Not to me, to my face, but to the customer. Customer blushes, says uhhhh.

I, the real me, the flesh me, pick up my bag and walk out the door. Not my bag.