I spent a fair amount of last winter working on this. I wanted a sense of confusion and depth. That feeling you get when you walk by a beautiful scene, but you don’t want to walk into it. It’s too complicated, too messy. What the hell could be in there anyway? Whatever it is it could bite. I could get thorns in my feet, thorns in my side, troubles in my mind. It’s beautiful though.

I had some old pictures of a trip to the Kennedy Space Center and a fantastic piece of water color paper, some pigment, some pens, some ink. With these things I faced my fear of the future. One picture was a looking up at a generator of some kind— tangled bits and pieces of shiny chrome and metal. It had the shape of a neck. It seemed appropriate to me a head should be attatched. And upon the head is an expressionless face that is more finished than the rest of the body and yet not finished enough because there is neither love nor compassion within.

It’s not “rocket science” to say something wicked is upon us in these times of plague and treachery. Fear is everywhere. There is a certain groupthink that preaches giving others due process somehow violates or diminishes their own. That somehow A giving to B is a perceived threat to C. Some are trapped inside a reality of their own choosing, forgetting to take walks at night to take in the air. Some are waiting for the worst to happen. Maybe some are stretched to the breaking point wondering where their next job, next paycheck, next meal might be. Then there are those waiting in the wings with weapons, ready to give up their humanity for a pointless cause. But real power is not in the hand —it is in the mind. Fear is an ether that makes one weak and easier to control. Fear leads to hatred, which leads to persecution and violence. It is the viper that eats its tail and turns in on itself until it is gone into black, the manifest of the end of life itself.

Are we really no better than androids marching into a decaying stratosphere? When would it be a good time to stop fighting each other and levy justice on the actual oppressors? To stop clinging to old ways that continually hurt us and our chances of surviving on this earth? Control is Chaos. Civilization is not civil at all. Our methods of coping are flawed and decaying, getting worse with every decade. The clock is tick tick ticking. 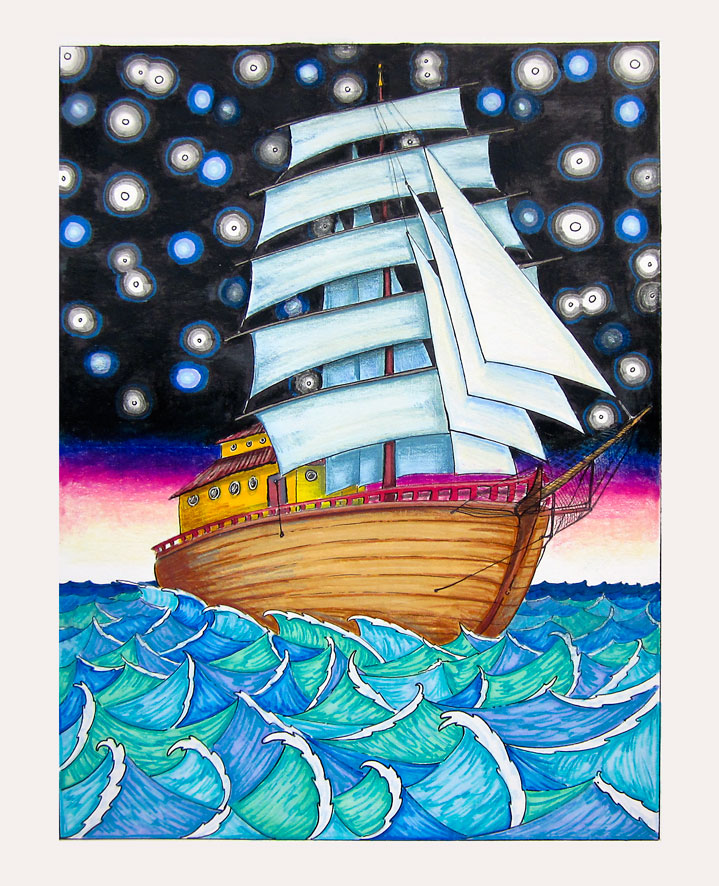 We may be adrift in a vast angry ocean, but at least the stars are out.

It makes me happy.

A couple weeks ago I was standing on a mountain and I really did feel sunshine on my shoulders. It was about 20 degrees but the sun was ablaze and the sky was going from periwinkle to ultraviolet to deep indigo.  I know I should have been cold but suddenly my shoulders were ablaze and the rays found its way through two or three layers.

The sun was in my eyes too, but it didn’t really make me cry except to feel joy. I never knew what John Denver meant by that second line

“sunshine in my eyes can make me cry”

But in that moment I did understand. Sunshine is so beautiful it makes you cry. Beautiful as to be blinding. It was too bright to see beyond my tracks in the snow. But I could feel an ethereal love starting as a tiny pinpoint and ending in an infinite ray.  A love that came from a million miles away, a singular white light love that only a burning star can send to a slowly spinning planet. As I stood there in my tracks on the trail that led into the sky I thought of one thing only.

I belong in the bright light, in the sphere of the now and the know.
I will stay here as long as I can.

That is what happiness is.

This is a quote from author and naturalist Paul Rosolie on the rain forest which is burning.

I came upon this photo in a travel magazine. It kindles dreams of visiting the rain forest someday. I’m not sure it will still be there when I get there. If it’s not there, it will be the least of my worries.

Green is the dream, you can’t get back from black.

Something down there stinks.

I would like to create something good
About good, borne from old fashioned beauty, but

My outrage has threatened my voice and my soul. To be outraged is to be paralyzed. To feel hatred to such a degree is a threat to my own humanity.

We are tossed into the void with nothing to hold. There is no one to lead us through this morass, not this time. You are on your own. Never in history has it been more vital to know who you are and what you are about. Define yourself and act accordingly. Do not complain that you don’t matter; that you won’t be heard. You will be heard if you scream. Scream.

Only a few months into 2016 and I’ve realized all the major inspirations of my creative life are slowly passing on. Must I tack on yet another broody tome reflecting on the death of David Bowie? Yes.

It was David Bowie that taught us kids it was good to be different. Zesty and zany. The lifelong interwoven mystery of Major Tom. Pink monkey birds. Pappamamas and rock-and-roll bitches. Diamond Dogs and Cat People. Peoploids and Starmen. Vaudeville space rock meets Kibuki theater.

And they did. David Bowie was a pioneer, someone who sets the stage and rages it, constantly reinventing himself in such a way that made it clear that there would only be one David Bowie.

And how true it is that there is only one of each of us. We should express ourselves as freely as possible, borrowing a little nectar from this bloom to that, taking what we know and expanding the universe as we wander into the unknown. 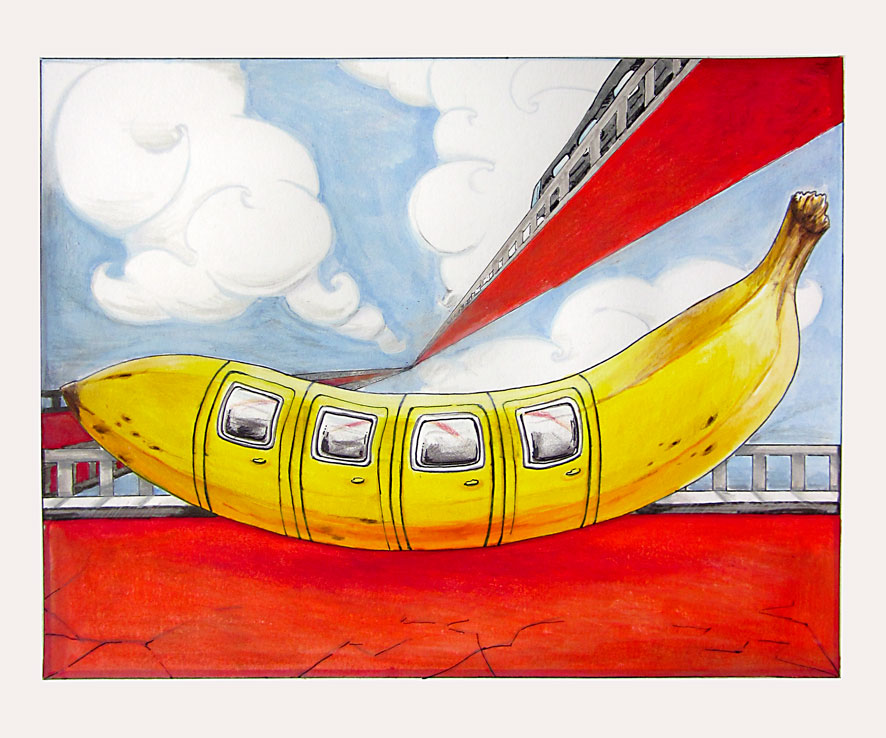 Speaking of autobiographies—another page-turner is Keith Richards’ Life. It’s a satirical title, considering all the blather about how he never should have survived it. Reading autobiographies have a way of flying celebrities back down to earth. They seem so larger than life and then I read about them and realize they’re just monkeys like the rest of us. I’m thinking back to another autobiography where John Lennon explained to a fanatic who camped for days in his yard, hoping to meet him:

The colorful blobs are my take on sound. Ever since The War of the Worlds, I think about the aliens in the story who could sense things we could not. What if we could smell colors and see sounds? 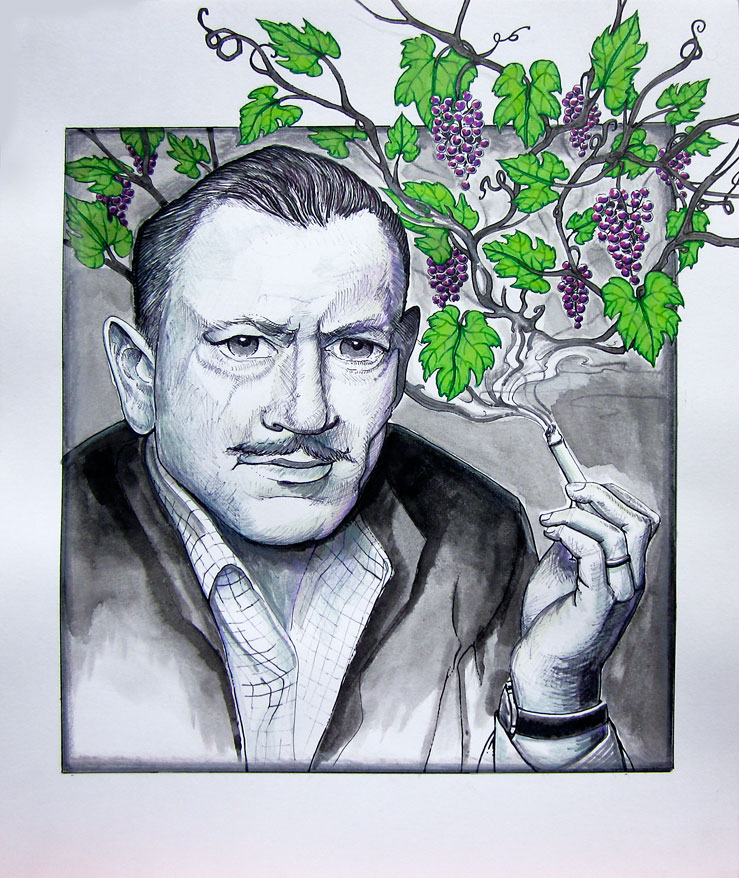 For anyone who wants to go beyond the American History textbooks of seventh grade, read The Grapes of Wrath. If you’re searching for a metaphor for your uncertain future, read The Grapes of Wrath. (If you prefer a metaphor for the Book of Genesis, read East of Eden.) If you still think the middle class really exists, read The Grapes of Wrath. When you reach the last sentence, ask yourself if anything in this country has really changed. It’s true that history repeats itself, because although we insist otherwise, people never really change. Some are virtuous, others are greedy. While it’s true that Americans  have certain freedoms that others do not, I never forget we are always free to starve. This is common knowledge for the masses, yet another truth that one half of one percent cannot understand.

Travels with Charley is one of the greatest classics of the travel genre. It is an autobiography set in 1960, when Steinbeck loads up a trailer and circumnavigates the United States with his dog Charley. One of my favorite things about Steinbeck is his honesty. If he never sugar-coated American History, he certainly didn’t sugar-coat his own reactions to the people and places he encountered. There is a favorite excerpt of mine in Travels with Charley. After driving all day, he rents a room where everything is sterilized, covered in plastic. (“Everyone was protecting me and it was horrible.”)  He goes to the hotel restaurant and meets a waitress, also adorned in a plastic apron. He finds her demeanor so dull and cynical (“Some people spread a grayness in the air about them.”)  he goes into a spiritual tailspin and ends up in the hotel bathtub with a bottle of vodka. Thankfully his dog Charley, who is well-documented as having a personality all his own which sustains his owner, coaxes him out of his funk by making him take him for a walk under the night sky. He sees the stars and he is cured. I’ve been cured by the stars too many times to count. They never fail. Knowing that Steinbeck had that same muse bonds me to him forever. It doesn’t matter he’s been dead almost as long as I’ve been alive, we are kindred spirits. If he came through the filament in plasma form and we had a brandy old-fashioned together, I’m sure we’d get along fine.

I hate to say it, but seeing Steinbeck with a cigarette smoldering between two typewriter-worn digits makes smoking look cool. Phillip Morris should have been paying attention. It’s not the cigarette, but something about his expression that tells me—with all his smoke breaks, the man has had some time to think. I wonder—especially now, when smokers are banished not only out of society, but at least ten feet away from it: what do they think about whilst huddled in a far frozen corner, taking another drag of nicotine between their blue lips? (Smokers, you have been prompted to comment on this blog!) Reading great authors like Steinbeck makes me understand that honesty is the hallmark of a great author. Great writers frame the truth; they know the truth is beautiful. They draw from their own experiences—they don’t presume to be something they are not, or try to write about things they know nothing about. Honesty is the best policy, anything less than the truth is propaganda at best. At the worst, it’s a shit sandwich.

Happy holiday of your choice. Smiling faces are fashionable all year long. Jerks not required.

My aspirations for the new year:

There will be a lot of plates to spin.

I’ve science-fictionalized a picture of two high school wrestlers featured in the local paper. This is a classic example of when I pick up something realistic, pass it through my turning wheels, and it emerges as something completely different.

I’ve learned to not to expect anything to turn out completely the way I imagine it. No matter how thorough I am in my planning, it never does. It’s a good thing I’m not a civil engineer. This is why I like impromptu mock-ups like this—there’s no expectation, just a glimpse of an oddity.

So who do you think wins the fight? Will it be the red guy or the blue guy? Does it matter? Is there an equation based on how many times you’ve watched Star Trek in your life? Is it possible that all the stories you’ve heard can be condensed down to one or two stories?The first story is the good guy wins, the bad guy loses. The second story is the bad guy wins and the good guy loses. Win, lose, lose, win. Is there anything else? And yet, there are as many stories as there are stars. It’s the post-modern era blues.